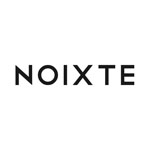 BRAND CONCEPT
NOIXTE is urban contemporary brand that encompasses the concept of no-exist and nomad spirit. The brand started
with the inspiration from fiction 'Flat Land' by Edwin A. Abbott, which deals with the geometric concept in 2-dimensional
world.
NOIXTE collection for each season shows a kind of journey that is made by reinterpreting 3-dimensional structure
made of dots, lines and faces on the body. Not only practicality and functional structure of clothes but sophisticated
detail is the aesthetic pursuit of NOIXTE.